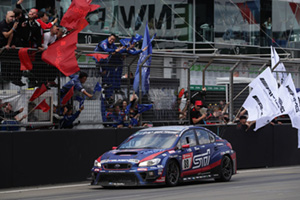 In this year's race, we were fortunate to have sunny weather from start to finish; however, with many crashes occurring throughout the race, we were reminded of just how difficult a race it is to run without trouble. Our FALKEN tires helped to steer the team toward finishing without any technical difficulties or accidents. As a result, Team Subaru Tecnica International finished 19th overall, thus claiming their sixth victory to date in the SP3T Class.


<Update: July 11, 2019>
After the race, the vehicle that had placed second overall was disqualified due to a rule violation. As a result, Subaru Tecnica International's SUBARU WRX STI advanced to 18th place in the overall rankings.